Learn More
About Us

Learn More About Us 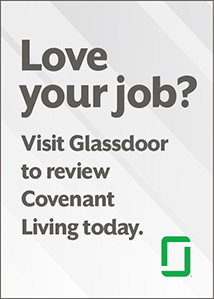 We believe in the power of service.

A leader in faith-based senior living and continuing care, Covenant Living is one of the largest not-for-profit retirement living organizations in the nation, with 15 communities in 10 states.

Our 2,800 employees serve more than 5,000 residents in a nationwide family of Continuing Care Retirement Communities (CCRCs). Our employees reinforce the spirit of service at communities from coast to coast.

Our commitment to service is at the heart of everything we do. We invite all employees to recognize their co-workers for extraordinary service.

There is no better role model for a Covenant Living Communities and Services employee than Terri Cunliffe, the President and Chief Executive Officer (CEO) of Covenant Living.

While studying music in the ’80s, Terri began working as a part-time receptionist and office manager at what were then called “nursing homes.” Playing guitar and piano for seniors led her to her life’s calling. In 1987, Terri earned a bachelor's degree in long-term care administration from the University of Minnesota. She did her internship at Covenant Living of Golden Valley.

She began her career with Covenant Living Communities and Services in 1988 as the Assisted Living administrator at Covenant Living of Florida. Terri then earned her master's degree in Health Services Administration from Nova Southeastern University in 1991, and in June 1996 was named Executive Director.

As the Covenant Living leadership recognized a need for a greater emphasis on resident-centered health and wellness, Terri took on several new roles. She was named Executive Vice President in 2010, Chief Operating Officer in 2014 and CEO in 2015.

Terri believes in supporting the success of employees at all levels throughout the organization: “It’s essential that we continually identify and develop new leaders who will be ready to guide Covenant Living Communities and Services in the future.”

the perfect person for our team?